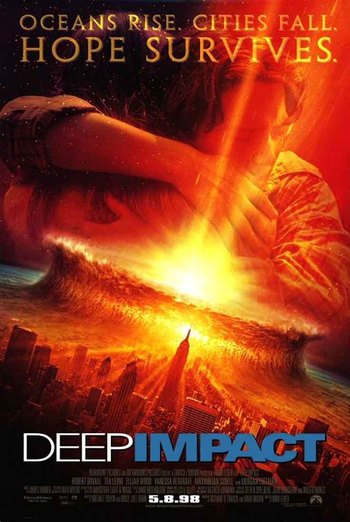 In 1998, Hollywood almost destroyed the Earth from space. Twice. This is about the one that didn't involve Bruce Willis.

Deep Impact is a 1998 sci-fi/drama Disaster Movie released by Paramount Pictures and DreamWorks SKG in the United States. The film was directed by Mimi Leder, and stars Elijah Wood, Téa Leoni, Morgan Freeman and Robert Duvall. It is loosely based on a book by Larry Niven and Jerry Pournelle called Lucifer's Hammer.

The plot is roughly divided into these plot-lines:

Although the film's premise is similar to that of the more famous Armageddon (released the same year), the two movies are only superficially similar otherwise. Deep Impact is a drama movie first and foremost, and unlike the action-packed Armageddon, focuses mostly on depicting the effects of the meteor's impending arrival.