Film / The Curse of the Jade Scorpion 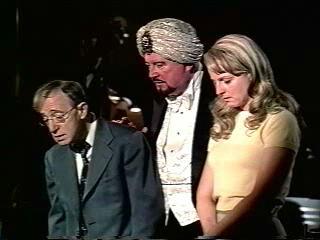 The Curse of the Jade Scorpion is an American film directed, written by and starring Woody Allen. It was released on August 21, 2001.

The story follows C.W. Briggs (Allen), an insurance investigator, and Betty Ann Fitzgerald (Helen Hunt), an efficiency expert. Both are hypnotized by Voltan (David Ogden Stiers), a crooked hypnotist, into stealing jewels from the rich Kensington family. The movie details the ensuing robberies and the investigation and attempts to overcome the hypnosis. Since this is still a Woody Allen movie, there's a strong subplot focused on the relationships of Betty Ann, CW, and their boss Chris Magruder (Dan Aykroyd). Wallace Shawn also appears as George Bond, another insurance investigator and magic enthusiast.