Film / Curse of the Pink Panther 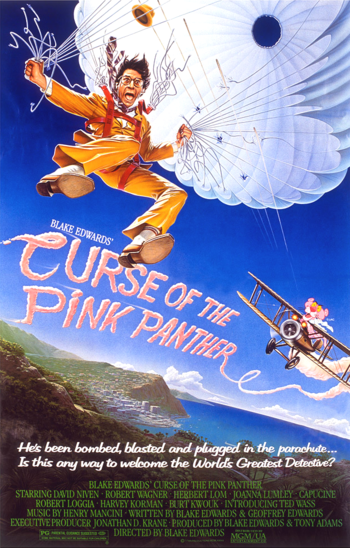 What they asked for was the World's Greatest Detective. What they got was the World's Cloddiest Cop.
Dreyfus: You know, Francois, I have a horrible feeling we are seeing history repeat itself.
Francois: What do you mean?
Dreyfus: When they were pulling out the goldfish, I remember thinking "Did Clouseau have any relatives in the states"?
Advertisement:

Curse of the Pink Panther is a 1983 crime/comedy film and the eighth installment in The Pink Panther franchise, once again directed by Blake Edwards. This film is the first in the franchise not to star Peter Sellers as Inspector Jacques Clouseau, who had gone missing in the film prior to this one. Instead, the spotlight is given to up-and-coming actor Ted Wass (chosen from his role as Danny Dallas from TV sitcom Soap), who plays Detective Sergeant Clifton Sleigh, a bespeckled American police officer.

One year after Inspector Clouseau has disappeared, the President of France orders Dreyfus to program a supercomputer to select a new detective just like Clouseau (whom the world believes to be a Great Detective) to find him. Naturally, fearing that the new detective will indeed find Clouseau and ruin his life all over again, Dreyfus consults a criminal computer genius to help him sabotage the computer to instead select the worst detective it can find...

And he gets his wish.

The computer selects Detective Sergeant Clifton Sleigh, a haplessly-inept but well-meaning American cop from New York City who, as expected, is every bit as bungling as the man he's looking for!