Film / Revenge of the Pink Panther 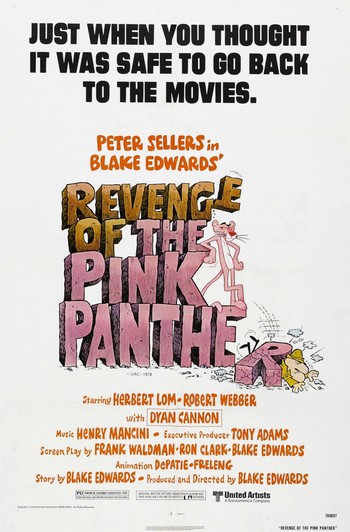 Clouseau's out to solve his most dangerous and most personal case yet; his very own murder!
Clouseau: These are not normal times, Cato. Someone has just tried to kill me.
Cato: That’s normal.
Clouseau: Ah! But this time, that someone thinks he has succeeded. Except for you and me, the whole world believes that I am dead! In this case, death has its advantages. No one will know it is me, as I glide through the underworld like a shadow...
Advertisement:

Revenge of the Pink Panther (1978) is the sixth film in The Pink Panther franchise, once again directed by Blake Edwards and, for what would be the final time, starring Peter Sellers as the great Inspector Clouseau.

Mafioso Philippe Douvier (Robert Webber) is suspected of weak leadership by his New York business partners, who put "the Gannet transaction" — a fifty-million franc sale involving a yacht and forty kilos of heroin — on hold. Determined to prove that he is still powerful, Douvier holds an emergency meeting with his group, "the French Connection", to decide on what to do to grab the world’s attention. One of his men, Guy Algo (Tony Beckley), comes up with the perfect eye-opening plot:

After a few failed attempts, Douvier’s men finally end Clouseau after he crashes his car into a tree… or so they think…

While all of France — minus Chief Inspector Dreyfus (Herbert Lom), of course — mourns over the loss of their greatest crime-solver, Clouseau himself decides to use his "death" to his advantage, and now, using a plethora of creative disguises provided to him by the great Professor Balls (Graham Stark), it's now up to Clouseau, his little yellow tagalong Cato (Burt Kwouk), and Douvier's ex-lover Simone (Dyan Cannon), to stop Douvier and the French Connection.