I Broke a Nail 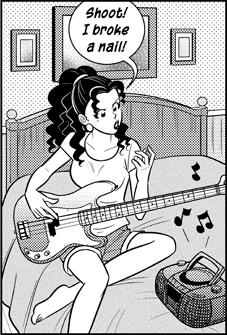 Drakken: But, Shego, we escaped with the E.M.A. unscathed.
Shego: [crying] Yeah, but I broke a nail!
Drakken: I break mine all the time; you don't see me crying. Not on the outside.
— Kim Possible
Advertisement:

Stock phrase of the City Mouse, Fallen Princess, Rich Bitch, Alpha Bitch or, more stereotypically, the token woman. Sometimes used by the Action Girl after a particularly grueling fight in which this is the only injury she is concerned about. In any case, the character is Always Female unless it's a deliberate play on the trope. The phrase is, of course, used to show off how petty or vain she is, especially if it's used in the face of more pressing concerns. It may also be a Berserk Button for her.

Most Writers Are Male, with short-clipped nails that rarely if ever get broken. As a result, it took a long time for women to get across that a nail can be broken more badly than just spoiling her manicure. They can be ripped right back to the finger, damaging the cluster of nerves at the tip and causing bleeding. Simply put, broken nails hurt, and that's why she's crying. It can also lead to a hangnail, which can easily get infected. Nowadays, it's used more as a joke than anything, often by an Action Girl who's just been in a fight to show how tough she is that this is all the damage the guys could do to her. Because of this, it's become a Discredited Trope.

Sometimes guys use it to show that they're very vain. Occasionally, this is used as an insult toward the rich, that they would fret about breaking a nail if they were outdoors, or otherwise tasked with work.

Compare Minor Injury Overreaction, which this is a subtrope of. For serious injury to the nail, look under Fingore. When this happens to toenails, look up Agony of the Feet.