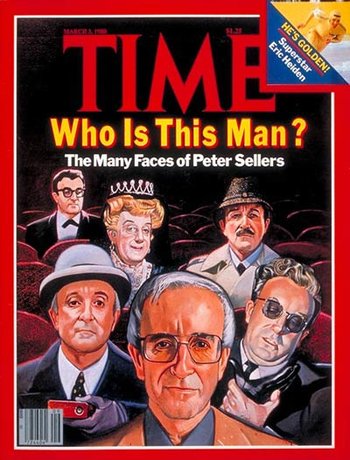 From back row to front, going from left to right: Clare Quilty (Lolita), Grand Duchess Gloriana XII (The Mouse That Roared), Chief Inspector Jacques Clouseau (The Pink Panther), Chance the Gardener (Being There), Dr. Strangelove (Dr. Strangelove), and the actual(?) Peter Sellers.
"There is no me. I do not exist... There used to be a me, but I had it surgically removed."
— Peter Sellers, The Muppet Show
Advertisement:

Born Richard Henry Sellers, son of the mixed marriage between a Jewish Mother and a gentile father, but ultimately adopting his nickname, the actual name of his parents' short-lived first child, Peter Sellers CBE (8 September 1925 – 24 July 1980) is widely regarded as one of Britain's—and cinema's—great comic actors.

Sellers first attracted attention on BBC radio in the late 1940s; he was an excellent impersonator, capable of a wide variety of accents, and was particuarly gifted at taking on multiple roles, making the individual characters distinct. In fact, his talent for impersonation got him his first job: he rang a BBC producer and used the voice of Kenneth Horne, a respected radio talent, to wax enthusiastic about the talented young performer called Peter Sellers whom he, Horne, had just seen on stage. He then confessed that he was Sellers, using Horne's voice to make a point. The producer, who had been taken in completely, was impressed and offered Sellers a contract. Joining up with Harry Secombe and Spike Milligan (and Michael Bentine, who left after the first two years), he was a key member of The Goon Show in the 1950s, staying with it even as he started seeking film roles and expanding on his talents. Also during this period, a few television variants on the show's absurdity, such as A Show Called Fred, were made and launched the career of director Richard Lester. (The Beatles were quite fond of the Goons.)

His film breakthrough was a supporting role to Alec Guinness in The Ladykillers in 1955.note Sellers made his own tape recording of the film's audio track, performing every role himself in all of the actors' voices, and then played it to the unsuspecting cast and crew over a loudspeaker. Producer Michael Falcon recalled it was spooky to listen to. He became firmly established as a film star in 1959 with two of his biggest successes. One was I'm All Right, Jack, for which he won the British Academy Award for Best Actor - and he wasn't even the lead. The Mouse That Roared was his first international hit in which he played three lead roles. His short film The Running Jumping & Standing Still Film, made at this same time in collaboration with Milligan and Lester, got nominated for an Oscar and got Lester a gig directing A Hard Day's Night.

The early 1960s yielded his best-known work. On the one hand, he worked with Stanley Kubrick twice: as Clare Quilty in Lolita and as three leads in Dr. Strangelove or: How I Learned to Stop Worrying and Love the Bomb note Notably, Kubrick, who was otherwise known for being a notorious perfectionist and keeping actors on a very tight leash, allowed Sellers to freely improvise and even kept a camera on him at all times during filming, just in case he would suddenly say or do something funny. for which he received an Oscar nomination for Best Actor. Loads and Loads of Roles were a constant throughout his career; indeed, if Sellers wasn't playing multiple roles in a film, there was a good chance his character was a Master of Disguise or at least a wannabe, leading a double life, or some combination thereof. In The Naked Truth his character disguised himself to protect his double life; in The Fiendish Plot of Dr. Fu Manchu, he played two roles, one of whom used the occasional Paper-Thin Disguise.

On the other hand, he originated a Breakout Character, Inspector Jacques Clouseau, in the first two entries of The Pink Panther series, The Pink Panther and A Shot in the Dark. Clouseau and some of his other characters were excellent examples of The Fool, but Sellers was adept at making them sympathetic. Clouseau is also a typical example of Sellers' gift for playing different nationalities and ethnicities, in this case a Frenchman. While he played plenty of different Brits in his career (and could convincingly essay a variety of UK accents), he also played American, German, Indian, Spanish, Italian, Japanese, and Chinese characters. Some boiled down to funny foreigners but others didn't.

Sellers' facility with accents and tendency to lose himself in his characters, and his personal insecurities and lack of a stable self-image, are uncomfortably reflected in an old interview he did on British TV. After Sellers had demonstrated various accents and character types, at one point the interviewer asked if he was now speaking with his real voice. Sellers pauses, looks genuinely confused, and responds, "I don't know." What some might have seen as a throwaway joke was viewed as a serious and genuine response, and a very telling one, by those who knew him.

Sellers was a notorious Manchild, partially because he had an overbearing stage mother and was used to being coddled; stories of on-and-off-set tantrums are legion. He was also something of a fabulist and fantasist. It appears absolutely certain now that Sellers never had the affair he claimed he had with Italian actress Sophia Loren. He was deeply infatuated with her after they filmed together, and she was taken with his comic persona. To this day, she adamantly denies what Sellers adamantly asserted: her marriage to Carlo Ponti was happy and monogamous (and remained so until Ponti's death in 2007), and Loren had no reason to be unfaithful. Sellers was again acting as what, today, would be termed a stalker, and this would put an end to his own first marriage, which was having enough problems as it was. The worst stories told about that period and his second marriage to Britt Ekland claim he was a Domestic Abuser.

Another point debunking Sellers' claims of the Loren affair is that he made similar claims about at least two more co-stars later in his career (Dany Robin and Shirley MacLaine, to be specific). However, despite official denials, there is rather more truth to Sellers' proud assertion that he had an affair with the Queen's sister, Princess Margaret. At the time he was in-between wives and her marriage to Lord Snowdon was breaking down amid infidelities and recriminations on all sides.

In 1964, not long after the release of most of the above, he suffered multiple heart attacks that left him clinically dead for 2½ minutes. He was eager upon recovery to go back into film work, but as popular as he had become, he did an increasing number of projects unworthy of his talent or simply uncommercial (e.g., The Magic Christian). Worse, his demanding style and resultant disagreements with directors and producers, particularly on Casino Royale (1967), got him a lot of bad press. Nevertheless, he did have the clout to encourage the release of Mel Brooks' The Producers when its studio tried to meddle in 1968. And he collaborated successfully with Blake Edwards on a standalone film project, The Party, which became known for its minimal script and reliance on Improv.

Even though the actual quality of his performances remained surprisingly high throughout the late 60s/early 70s, and he kept working if only for money, by 1974 his career was almost dead. During this period he had to rely on cameo appearances in the TV shows of old mates like Eric Sykes and Spike Milligan to keep in the public eye. The original Goon Show team also reformed, to celebrate a significant anniversary. However, he was approached with an offer to revive the Pink Panther series and, realizing the potential gains, decided to reprise the Inspector Clouseau character. The resultant film, 1975's The Return of the Pink Panther, was so popular that two more sequels were made within the next three years. Beyond the Clouseau films, he followed that up the following year with his comical portrayal of Chinese detective Sidney Wang (as well as a few other roles that were ultimately cut) in Murder by Death, and made a guest appearance on an episode of the The Muppet Show which was the source of the now-iconic page quote. With all this, his career spectacularly recovered even as his health declined (the aftereffect of the 1964 attacks).

Finally he moved on to a pet project, a film version of Jerzy Kosinski's satire Being There. Peter identified so strongly with its lead character, Chance the Gardener, that he had wanted to play him since reading the book circa 1972; the resultant Oscar-nominated performance became, at least for him, his Moment of Awesome. The film was released in December 1979; Sellers made only one more film (The Fiendish Plot of Dr. Fu Manchu) before his death from one last heart attack in July 1980 at the age of 54.

Although his life was abbreviated and bittersweet, Sellers made over 50 feature films, hundreds of radio episodes, many TV appearances, four solo comedy albums and more. His is a legacy of unique, three-dimensional performances that remain the envy of many of today's comic actors, including the late Robin Williams note who, like Sellers, was an incredibly talented actor/comedian who had a tragic life until his untimely death, Eddie Murphy, Mike Myers, and Sacha Baron Cohen. Geoffrey Rush won an Emmy Award for playing Sellers in a 2004 Biopic, The Life and Death of Peter Sellers.

Not to be confused with Peter Sallis.

There is no Peter Sellers

Peter Sellers isn't able to just be himself.

Example of:
Lost in Character

There is no Peter Sellers

Peter Sellers isn't able to just be himself.