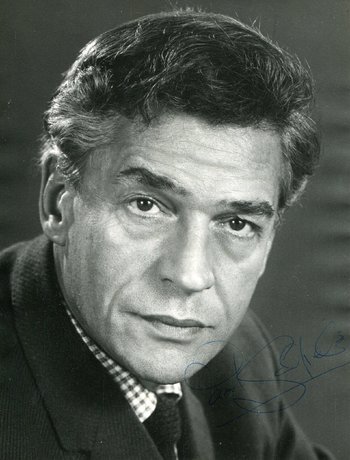 "Privacy is something hard to come by in our business, and if you want it you have to fight for it."
Advertisement:

David Paul Scofield CBE (21 January 1922 – 19 March 2008) was an English actor of stage and screen, well-known for his performances in such Shakespearean works as Hamlet and King Lear. He is probably best remembered for playing Thomas More in Robert Bolt's play A Man for All Seasons, a role which he reprised in the 1966 film version, winning him the Academy Award for Best Actor. He also originated the role of Salieri in Peter Shaffer's play Amadeus. Well-known for his rich voice, which director Fred Zinnemann compared to "a Rolls-Royce being started."

Although he was much in demand after A Man for All Seasons, Scofield turned down most movie roles; an extremely private person, he didn't enjoy the fame that accompanied film stardom (notably, he did not accept his Oscar in person, and he even declined a knighthood from the Queen). Additionally, his experience with the Troubled Production of The Train convinced him to only take film roles that he felt passionate about while focusing instead on the stage. Towards the end of his career, however, Scofield to appear as a character actor in films and television, earning a second Oscar nomination for his performance in Quiz Show. He also won a Tony Award for the Broadway production of A Man for All Seasons and an Emmy Award for the television film Male of the Species, making him one of the rare people to win the Triple Crown of Acting.