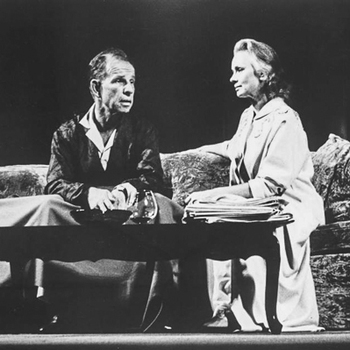 A Delicate Balance is a 1966 stage play by Edward Albee.

It is a domestic drama about upper-class suburbanites. Agnes and Tobias are a married couple in their late 50s, wealthy enough to have servants and to belong to a country club (although it's never specified what Tobias does for a living). They have a 36-year-old daughter, Julia, who has just returned home after breaking up with her fourth husband. They also have a permanent houseguest in Agnes's younger sister, Claire, an unmarried alcoholic. Agnes and Tobias also had a son, Teddy, but Teddy died years ago.

A film adaptation was released in 1973, directed by Tony Richardson and starring Katharine Hepburn as Agnes, Paul Scofield as Tobias, Lee Remick as Julia, Kate Reid as Claire, Joseph Cotten as Harry, and Betsy Blair as Edna.