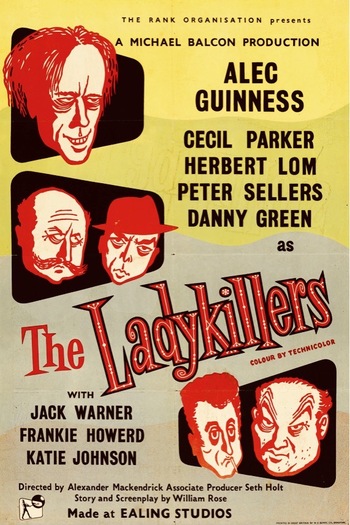 The Ladykillers is a 1955 British Black Comedy film from Ealing Studios, about a gang of London criminals who, pretending to be classical musicians, rent a room from Mrs. Wilberforce (Katie Johnson) in her lopsided house that sits above a railway tunnel.

The gang — consisting of "Professor" Marcus (Alec Guinness), "Major" Claude Courtney (Cecil Parker), Louis Harvey (Herbert Lom), Harry Robinson (Peter Sellers), and "One-Round" Lawson (Danny Green) — plan to commit a payroll robbery and use the house as a base, which proves harder than they think with Mrs. Wilberforce around.

A stage version premiered in England in 2012 based on the original, edited by Graham Linehan of Black Books and Father Ted. It received extremely positive reviews and featured an All-Star Cast, with Peter Capaldi as Marcus and Ben Miller as Louis.