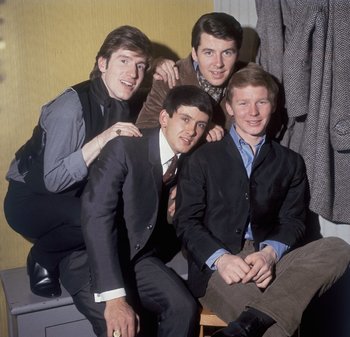 The Searchers is a 1960s band that was known for being part of The British Invasion. They were a part of the Invasion groups that came from Liverpool and are arguably one of the only groups from there to still be going strong in the 21st century.

The band evolved from an earlier skiffle band guitarist John McNally founded in 1957 with Brian Dolan on guitar and Tony West on bass. Dolan and West eventually lost interest and were replaced by Mike Pender (born Mike Prendergast) on guitar and Tony Jackson on bass. Joe Kennedy joined for a short time on drums before being replaced by Norman McGarry; the latter's arrival in 1959 is usually cited as when The Searchers were officially born, even though he too didn't last long in the band, being replaced by Chris Curtis (born Chris Crummley) in 1960. The vocalist position was initially held by "Big Ron" Woodbridge (born Ronald Woodbridge), who was replaced by Johnny Sandon (born William Beck) in 1960. Sandon left in late 1961, with Jackson taking up lead vocalist duties.

The Searchers rose to fame with their cover of The Drifters song "Sweets For My Sweet" in 1963, which was followed by such hits as "Needles and Pins", "Don't Throw Your Love Away" and "Sugar and Spice". "Needles and Pins" rose to #13 on the US charts, granting them an appearance with other British groups in the British Invasion, along with their friends The Beatles and Cilla Black, but it was at this point when lead singer and bassist Tony Jackson decided to leave the group. This was later followed by drummer Chris Curtis two years later, and the two men had brief solo careers.

It's believed that the band didn't recover after the two shock exits. As the 1970s began to come around, The Searchers continued to play the "distinct Searchers sound" — covering songs from the early years of bands, like The Rolling Stones and The Hollies. Their last ever UK chart hits were in 1966, and continued to make music for their fans, even though they weren't popular to be played on the radio. To this day, the band continue to tour around the UK, playing all of their old hits to their loyal public.

Meanwhile, Tony Jackson joined a band in the 1970s called the Vibrations that struggled to make it in the music business, eventually leading Jackson to retire his singing career. He died in 2003 from numerous medical problems, possibly from the result of his alcoholism. Chris Curtis was partly responsible for the band Deep Purple, by manufacturing their early group Roundabout. In the meantime, he released a single that went to #19 in the UK charts briefly, before dropping out almost immediately. At the end of the 1960s, he left the music industry for good, but managed to record many music demos that were never released as singles. He died in 2005.