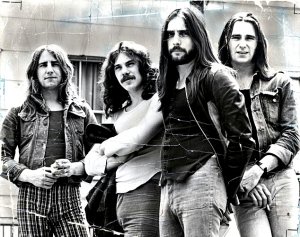 One of Britain's most consistently popular rock groups, Status Quo was formed in 1962 by school friends Francis Rossi (lead guitar, vocals) and Alan Lancaster (bass guitar, vocals). The classic Quo line-up, which lasted until 1981, was completed with the addition of John Coghlan (drums, percussion) and Rick Parfitt (rhythm guitar, vocals).

After brief flirtations with Progressive Rock and Psychedelic Rock yielded little success, Quo hit on the formula that's sustained them for the past forty years with the 1970 album Ma Kelly's Greasy Spoon, the first to feature their straightforward, no frills, blues-based boogie rock style powered by Rossi and Parfitt's dual Telecasters.

Notably, they were the band that opened Live Aid at Wembley Stadium with the song that is probably their Signature Song, "Rockin' All Over the World". When they were unavailable to play Live 8 twenty years later, Coldplay paid tribute with a performance of the song when they opened that show.

So far, in a career spanning more than 50 years, Quo have recorded 64 hit singles, with 22 of them making it into the Top Ten. They passed the 100 singles mark in 2013 with "Bula Bula Quo". They have spent more 415 weeks in the British Singles Chart, made 106 appearances on Top of the Pops (more than any other band), had 33 albums in the British Albums Chart (second only to The Rolling Stones in terms of quantity), and Prince Charles is known to be a fan - not many bands can say that now, can they?

Unfortunately Rick Parfitt suffered a serious heart attack in the summer of 2016 and had to permanently retire from live performances in October 2016 leaving the long time future of the band in some doubt. Irish guitarist Richie Malone deputised for Rick for the remaining 2016 tour dates. At the time the band said that no final decision on their future would be made until 2017 at the earliest, then on 24 December 2016, Rick Parfitt passed away. The band elected to continue with Malone officially joining the band as Parfitt's replacement and the band are currently on the road as of 2017.