Film / This is Spın̈al Tap 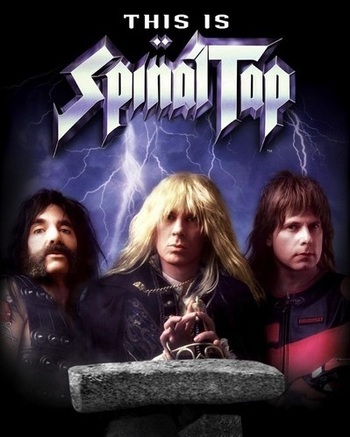 Marty DiBergi: (quoting a review) "This tasteless cover is a good indication of the lack of musical invention within. The musical growth rate of this band cannot even be charted. They are treading water in a sea of retarded sexuality and bad poetry."
Nigel Tufnel: Well that's... That's nitpicking, isn't it?
Advertisement:

Marty DiBergi's This is Spın̈al Tap (1984) is one of the greatest rockumentaries of all time. It may not be about one of the legendary bands, but it's a more intimate portrait than would have been allowed if it were about a more well-known band. It really gets inside the head of these rockers, and has more heart than any of those other rock films which consist mostly of filler between the concert scenes.

Not even Tennessee Williams could have written a better character study.

For those of you who don't know Spın̈al Tap, they're a Hard Rock band that's been making some of the loudest heavy metal music around for years. Charismatic frontman David St. Hubbins, mesmerizing guitarist Nigel Tufnel, and rock-solid bassist Derek Smalls, not to mention a long line of drummers and keyboardists, are musical geniuses. You may not know the band, but you've certainly heard their big hits, like "Big Bottom" and "Stonehenge".

The movie chronicles what may have been their darkest time; their infamous U.S. tour in the early 1980s. They nearly broke up, but they proved that what doesn't kill you makes you stronger, and they came back strong, despite all the mishaps and mismanagement.

For those of you who truly believe in The Power of Rock, this will affirm it like nothing else.note Alright, so it's actually a Mockumentary spoofing the egos and mishaps of other rock stars, starring Michael McKean, Christopher Guest, Harry Shearer, and Rob Reiner, who also directed. It's become a cult classic, with the actors making appearances elsewhere in character, and three real-world in-character albums by the band. Billy Crystal has a very very brief cameo as a mime. Anjelica Huston, right at the beginning of her film career, appears in one scene as the woman who built the Stonehenge set in accordance with some careless directions drawn on a napkin.

Spın̈al Tap's back catalogue includes (but is certainly not limited to):

All but the final three are *cough* "out of print".

"These tropes go all the way to eleven":

Example of:
Up to Eleven