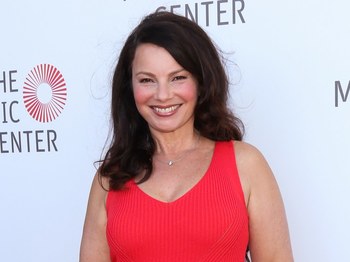 "I did a terrible television pilot that was so badly written and dumb that it became a turning point for me and I decided that I would never accept a job just because I needed the money."
Advertisement:

Francine Joy Drescher (born September 30, 1957 in New York City, New York) is an American film and television comedian, model, actress, producer, voice actress, and activist. She is best known for her role as Fran Fine in The Nanny and for her nasal voice and thick New York accent.

Drescher was born in Kew Gardens Hills, New York, to a Jewish family from Southeast and Central Europe. She attended Hillcrest High School in Jamaica, Queens, and later attended Queens College, City University of New York, but dropped out in her first year because all the acting classes were filled.

Drescher's first break was a small role as Connie in Saturday Night Fever. A year later, she gained more attention in films such as American Hot Wax and Summer Of Fear, before taking on a dramatic role in Ragtime During the 80's, she found moderate success as a character actress in minor roles, but found major fame in The Nanny, which she co-created with her then-husband, Peter Marc Jacobson.

She has since appeared in a wide range of visual media, from comedies like The Beautician and the Beast to dramas like Law & Order: Criminal Intent. She has also attempted to develop a handful of further sitcoms, though none of them have achieved the level of success she enjoyed with The Nanny.

On September 2, 2021, she was elected president of SAG-AFTRA.