Film / The Beautician and the Beast 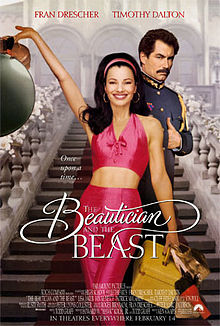 The King and Oy.
Advertisement:

The Beautician and the Beast is a 1997 American family comedy film directed by Ken Kwapis and starring Fran Drescher and Timothy Dalton as the title characters.

The story follows the misadventures of a New York City beautician who is mistakenly hired as the school teacher for the children of the ruler of a small Eastern European country. The story is loosely based on The King and I, with elements of The Sound of Music, Evita, and Drescher's sitcom The Nanny. Despite the film's title, it has nothing to do with Beauty and the Beast nor is it set in the Disney Cinematic Universe.