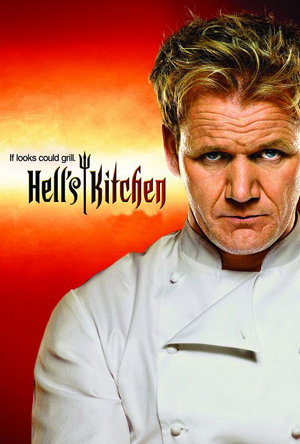 "Kitchens are run on emotions. I may get upset, but the most important thing is...it's not personal."
— Gordon Ramsay (in season 1)
Advertisement:

Hell's Kitchen is a Long Runner American adaptation of a British reality show. The original British version was a pretty standard "celebrities try to cook fine cuisine and fail hilariously" show, with the public voting for the winner, who would receive a decent-sized donation to their chosen charity.

Where the British Hell's Kitchen differed from other such shows was that its head chef and mentor, Gordon Ramsay, didn't hold back in calling out the celebrities on their blatant incompetence (as opposed to the relentlessly cheerful chefs that normally appeared on these shows). note In his autobiography, Ramsay was clear that he would never, ever, repeat the British format with completely inexperienced, egotistic and entitled people, as it reflected so badly on his own professional skills and he was concerned at the damage it could potentially do to his reputation. He singled out a career politician with a sense of entitlement a mile wide - who refused to do what she considered as "menial work" (basic prep - she argued other people should be doing this for her) for special bile. This show caught the eye of some American TV execs, who decided they wanted their own version. The resulting new version was one of the few instances where the Transatlantic Equivalent was widely regarded as being better than the original.

Hell's Kitchen features 12–20 chefs, selected from the thousands that apply each season, competing in various cooking challenges and working in the kitchen of a Hollywood soundstage turned into a fancy restaurant. The prize is a head chef position at a prestigious restaurant, usually with a $250,000 salary. Sounds simple enough, but what provides this show's appeal is that these aspiring chefs must compete and work together under the watchful eye of Gordon Ramsay.

Expect Chef Ramsay to show no mercy to the competitors, as it's his kitchen, and his reputation on the line if they screw up. They are put through their paces in a series of physical, mental, cooking and tasting challenges and dinner services, where they must prepare and cook food to Ramsay's exacting standards. They must co-ordinate with their teammates to ensure that all the food for each table is ready at the same time - if it isn't, Ramsay may force them to start the whole table again. If one or two individuals are failing, Ramsay may kick those chefs out of the kitchen for the remainder of the dinner service. Alternatively, he may kick the whole team out of the kitchen, often using his trademark phrase "Shut it down!" or "Switch it off!".

After dinner service, a losing team is usually selected (this can also be both teams) from which one or two of the weakest competitors must be nominated by their teammates for elimination. Those chefs that are nominated must then stand in front of Ramsay and tell him why they think they should stay in Hell's Kitchen. He will then decide who to eliminate. Sometimes he will ignore the nominations entirely, or send home a chef from the winning team. On rare occasions he will choose not to send anyone home, if both teams had a good service or someone had already left due to personal or medical reasons.

Much of the show's appeal (even among those who normally hate Reality TV) comes from the fact that it features the same kinds of people that plague these types of shows... but in a shocking subversion, they're punished for being stupid attention-starved assholes and rewarded for showing competence, maturity, and respect to both to each other and especially Chef Ramsay.

One of the most popular shows on FOX, particularly in the summers. Its popularity has led to the adaptation of another of Ramsay's British shows, Kitchen Nightmares, featuring all the swearing and screaming of Hell's Kitchen but without the competition. They even put him in charge of a show he wasn't on in the UK, MasterChef, although he's nicer there, tending to show disappointment instead of anger, and giving a lot of constructive criticism.

Recaps are available on The Other Wiki, starting with Season 1.

Now has its own Character Sheet.

Each episode usually consists of the following:

The finale changes things up. From seasons 1-5, the two finalists meet with the show's interior designer to discuss how they want their own dining rooms to look for the final dinner service. The dining room redesign was dropped from season 6 onward. Ramsay then takes the finalists to the restaurant that they could win and they have to perform one last challenge by cooking several meals to be presented to several professional chefs. Eight chefs that were sent home previously come back one last time to help out the finalists during dinner service. After everything is all over, the finalists stand behind a pair of doors. One of them opens and the other does not. The chef who gets the unlocked door is the big winner of Hell's Kitchen.Not to be confused with the manga or haunted house of the same name, Hell's Kitchen, Manhattan, or the former title of The Boy Who Fell.

These Tropes are RAW!!!:

In Season 8, Antonia presents her Signature Dish: Mardi Gras Gumbo. Not only did it look bad, but it also tasted horrible. And this time, Ramsay decided to share the pain.

In Season 8, Antonia presents her Signature Dish: Mardi Gras Gumbo. Not only did it look bad, but it also tasted horrible. And this time, Ramsay decided to share the pain.