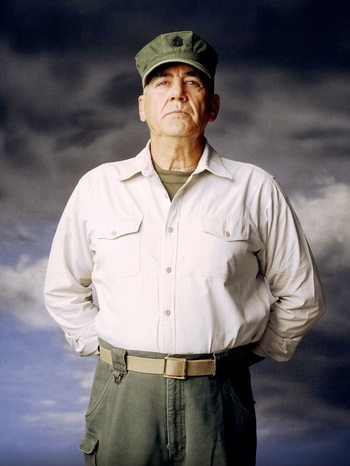 That's Gunnery Sergeant R. Lee Ermey to you, maggot!
"Every character I've ever played, I always try to take him right to the edge and not allow him to fall over, but directors have a tendency to pull me back a little bit."
Advertisement:

Gunnery Sergeant Ronald Lee Ermey (March 24, 1944 – April 15, 2018) was a U.S. Marine Corps drill instructor and Vietnam War veteran who later found fame as a character actor and media personality. Probably one of the most iconic examples of Cast the Expert, as he drew on his military experience for his acting roles.

After appearing in The Boys in Company C (playing—what else?—a Marine drill instructor) and serving as a technical advisor to Francis Ford Coppola for Apocalypse Now and Taylor Hackford for An Officer and a Gentleman, Ermey became a pop culture icon with his role in Stanley Kubrick's Full Metal Jacket, which had him play a foul-mouthed drill instructor whose sadistic training methods end up driving one recruit insane and leading to both of their deaths. Incidentally, his scenes are one of the few times Kubrick ever allowed improvisation in any of his films. Notably, Ermey had only signed on as a technical advisor, but the instructional tape he put together (that featured him yelling for 15 minutes while being pelted with rotten produce) convinced Kubrick to just make him the sergeant instead.

Ermey's performance made him the poster child for the trope Drill Sergeant Nasty and landed him work in other films (most notably Se7en, where he ironically plays against type as a rather mellowed-out police captain), as well as a slew of voice-over work due to his distinct gruff voice (such as Sarge, the leader of the Army Men in Toy Story), and ultimately a hosting job for several History Channel military-themed shows (Mail Call and Lock n' Load with R. Lee Ermey). He also guest-starred as the abusive ex-Drill Sergeant Nasty father of the title character of House.

He actually retired from the Marines as a Staff Sergeant. In 2002, he was the first person in Marine Corps history to be promoted after retirement when the Commandant of the Marine Corps ordered an honorary promotion to Gunnery Sergeant "in recognition of his continuing support to Americans in military service, and of his service as an unofficial ambassador for the Marine Corps."

Ermey passed away from pneumonia complications in April of 2018.