Film / An Officer and a Gentleman 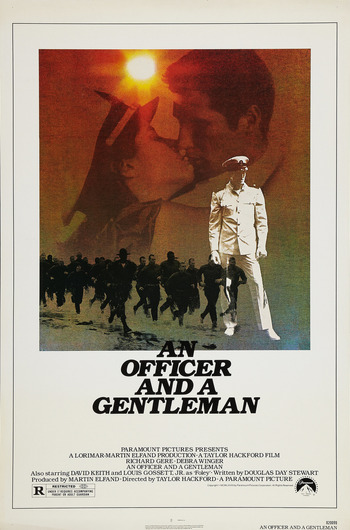 Love lift us up where we belong
Where the eagles fly
On a mountain high
"You know something, you ain't nothing special. You got no manners, you treat women like whores and if you ask me you got no chance of being no officer."
Advertisement:

Zack Mayo (Gere) is an orphaned loner who grows up to be an emotionally isolated opportunist after his mother commits suicide and his father ignores him. After graduating from college, he joins the Navy in hopes of becoming an aviator, and enters officer's training under the tutelage of Drill Sergeant Nasty Emil Foley (Gossett). Despite being warned about the local girls who are looking for potential officers to marry, Zack and his friend Sid Worley (Keith) begin to date two local girls, Paula Pokrifki (Winger) and Lynette Pomeroy (Lisa Blount). Along the way, Zack learns the importance of friends and colleagues.

Earned a Best Supporting Actor Academy Award and Golden Globe for Gossett...who, it should be noted, had to beat out his co-star Keith, who had also been nominated for the latter award.

Despite the name, the movie is not the Trope Namer for the Officer and a Gentleman trope.