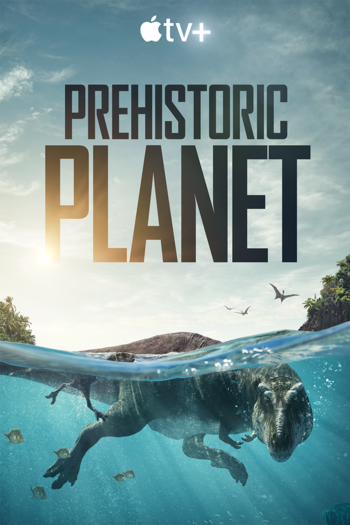 Unknown, unexplained, unbelievable ... until now.
"There are many ways to describe life on this planet. Some creatures could be called magnificent, or monstrous, perhaps misunderstood. But only a few creatures who roam this earth could be called all three."
— Sir David Attenborough, official trailer
Advertisement:

Prehistoric Planet is a dinosaur Speculative Documentary that debuted on Apple TV+ on May 23, 2022

, produced by both the BBC Natural History Unit and Jon Favreau, and directed by animators Andrew R. Jones and Adam Valdez of Moving Picture Company (who also provided the series' VFX and animation). It documents prehistoric life around the world during the Maastrichtian stage of the Late Cretaceous which spans from 72.1 to 66 Million years ago, just before their extinction. David Attenborough narrates, while Hans Zimmer provides the score.