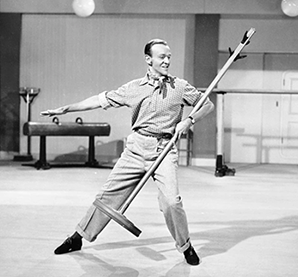 "When there's no-one else in sight
In the crowded lonely night
Well I wait so long
For my love vibration
And I'm dancing with myself."
— Billy Idol
Advertisement:

In some cases, a program - or advertisement - will show someone dancing by themselves. Typically this is a person doing a side-to-side move but depending on how well they do, it could be quite good. (Note that the music video of the eponymous song shows Billy Idol fighting off zombies, and holding onto a transformer and shooting electricity at them, but he never dances.)

Compare Everything Has Rhythm when a character dances with a prop. See also "Risky Business" Dance.