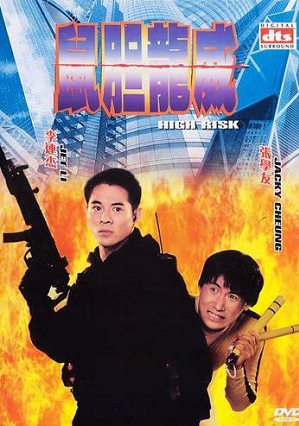 High Risk (alternatively known as Meltdown in the U.S.) is a 1995 action-comedy film directed and produced by Wong Jing. It stars Jet Li and Jacky Cheung.

After failing to save his wife and several children from a Mad Bomber named “The Doctor,” Kit Li retires from the Honk Kong police squad and becomes a bodyguard and stunt double for action star Frankie Lone. However, two years after the tragedy, the Doctor and his group of terrorists return to cause more trouble for Kit when they storm the Hotel Grandeur and take everyone hostage. With the help of Frankie and Detective Chow, it’s up to Kit to sneak inside the hotel, save the hostages, and stop the Doctor for good.

Tropes present in High Risk include: