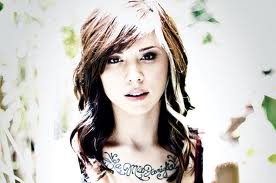 Christina Perri, without her Jar of Hearts.
Advertisement:

Christina Judith Perri (born August 19, 1986) is an American singer-songwriter and musician from Philadelphia. She's been performing since 2009.

Her song "Jar of Hearts" charted in the United States after it was featured on the Fox television show So You Think You Can Dance in 2010. Rolling Stone named her the "Band of the Week" on October 26, 2010. In 2011, "Jar of Hearts" was featured on the shows Glee (season 2, episode 20 "Prom Queen") and Switched at Birth (season 1, episode 4 "Dance Amongst Daggers"). One of her songs, "A Thousand Years", has been in the Twilight saga movie Breaking Dawn.

Collecting your jar of tropes: