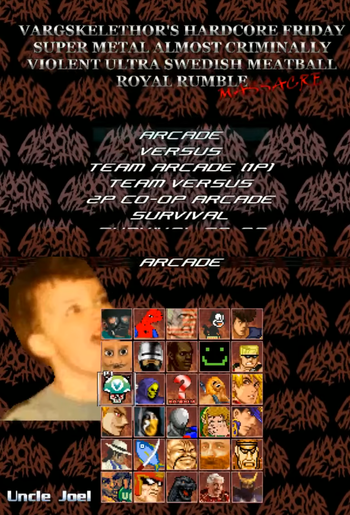 The menu screen, and the character select one.
Vargskelethor's Hardcore Friday Super Metal Almost Criminally Violent Ultra Swedish Meatball Royal Rumble MASSACRE!, or simply shortened as VHFSMACVUSMRRM, is a M.U.G.E.N screenpack made by Brergrsart in tribute to Vinesauce Joel. The screenpack includes Joel himself as a playable character, complete with other characters that appear or at the very least related and/or referencing to his previous streams, including Bootleg Felix the Cat, Bulk Bogan, Jotaro Kujo, Skeletor, and so on.
Advertisement:

The plot is as complicated as you'd expect from a crossover fighting game; One day, Joel is streaming Mischief Makers on his computer, when suddenly he spills some water onto his computer. The water contains magical properties that makes all of his previous streams comes to life! It's now up to Joel to save the day. And that's just one of them, each character (sans the secret ones) has their own separate story from Joel himself.

. While the core game is already completed, Brergrsart has stated that he may update the game at some point.