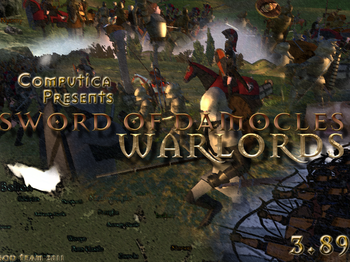 Sword of Damocles is the name of two parallel Expanded Universe mods for Mount & Blade, both adding several factions and focusing on the building of an empire instant of being the servant of a king.
Advertisement:

The original Sword of Damocles, or SoD (latest version: V5) is an alternate version of the original campaign. The player is the heir of his faction, who left his birthplace with a few troop and came to Calradia in order to escape the invasion of the Imperial Legion. He/She then has to conquer most of Calradia to unite it and create a strong kingdom which will be able to resist to the invasion force if the Imperial Legion crosses the sea. It happens about a year after the beginning of the game.

SoD adds several special factions to the five of the Vanilla game: the invading Imperial Legion, five player-only factions (the player chooses at the beginning of his game which one he chooses, then he is the only one to be able to recruit troops for this one; the non-chosen factions disappear from the game), and six mercenary factions (the player can hire low numbers of their soldiers, it is also possible to sign a contract with one of them).

The mercenary factions are:

SoD needs the original Mount & Blade game (not Warband!) to work. A download link can be found here

The other mod, Sword of Damocles: Warlords, or SoDW (latest version: V3.92) is the sequel of SoD. Its events are set more than forty years after SoD, after the invasion of Calradia by the Imperial Legion have been repelled. Then the factions (including the player-only ones) started to conquer another continent, which ended totally controlled by them when SoDW begins.

As in SoD, the player (who descends from the player of SoD) can choose his native faction among five of them. The same mercenaries are still there, but they don't exist as factions, only as random guys that can be hired in taverns (although it is planned to implant them as actual factions). Contrary to SoD, the former player-only factions (and the Imperial Legion) are factions working like the default ones. There are more several hundredth places, divided between twelve factions (thirteen with the player's one).

Unrelated to the same name trope, although the Imperial Legion invasion of SoD is a sword of Damocles in the meaning of the phrase

For tropes related to the setting and gameplay which are unchanged from the unmodded game, refer to the Mount & Blade page.

The Sword of Damocles Mods Provide Examples Of: