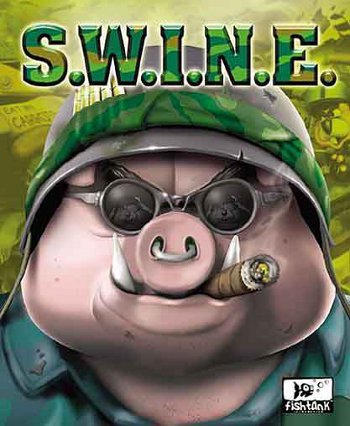 S.W.I.N.E. (or, to give its full name Strategic Warfare In (a) Nifty Environment), is a small quirky RTS game originally released in 2001, and the gameplay precursor to the serious-if-shortlived Codename Panzers series. The basic plot of the game is that the Pigs' military under General Irontusk overthrow the old Republic, and then invade the Rabbits. A lot more thought was put into the gameplay.

As of Christmas of 2006, the game became freeware and can be downloaded from the image caption. In 2019, a HD remaster was announced

under the banner of Kite Games and some of the original developers, along with enthusiastic fans.

The Pigs have German Accents and the Rabbits are French. This has some clear implications.