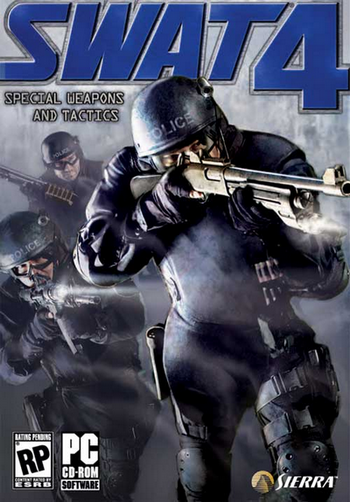 "Police! On your knees!"
"Bring Order to Chaos."
Advertisement:

A realistic tactical First-Person Shooter video game, developed by Irrational Games (makers of System Shock 2, the BioShock series and (surprisingly) the Freedom Force series) and published by Sierra in 2005. It's the fourth installment of Sierra's S.W.A.T. series (itself a Spin-Off of the older Police Quest series). The game is set in the fictional US East Coast city of Fairview and unlike its predecessor, SWAT 3, it deals with more mundane-themed missions, usually involving professional rescuing of hostages or neutralizing various terrorist groups or criminal gangs. The player takes on the role of a young SWAT Team officer, a recent transfer from the LAPD to the Fairview special response unit, who acts as the leader of a five-man SWAT squad, issuing commands, and using team work and close cooperation between all the members of the squad to achieve the necessary goals of each mission in the most effective way possible.

SWAT is primarily a life-saving organization, so your main objectives are always to rescue all civilians, arrest all suspects and occasionally secure some needed evidence. This is not as easy as it sounds, since you have to take caution not to harm or kill any of the civilians and make sure you fire at suspects or outright kill them only when necessary. Trying to beat the game by fighting your way through guns blazing is not an option. Fortunately, you have a wide variety of special weapons, ammo and SWAT gear in order to defuse high-risk situations.

The game aims heavily for realism, being one of the few games on the far end of the Fackler Scale of FPS Realism. As with the predecessor, the game is well-known for its quality production values and innovative gameplay (though with many non-videogame elements, such as documentary, being cut), some of which influenced Irrational's later works.

For its predecessor, see SWAT 3.

For the series that this game descended from, see Police Quest.

Soviet Womble and his friends uncover (and heavily lampshade) the behaviour of SWAT 4's AI.

Soviet Womble and his friends uncover (and heavily lampshade) the behaviour of SWAT 4's AI.