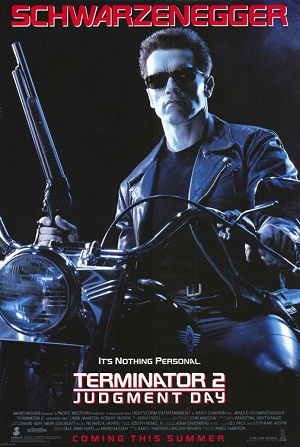 Terminator 2: Judgment Day is the 1991 sequel to 1984's The Terminator and the second film in the Terminator franchise. James Cameron returned to the director's chair, and both Arnold Schwarzenegger and Linda Hamilton returned for their roles as the T-800 Model Terminator and Sarah Connor. Similarly to Aliens, which Cameron directed during the interim between the first two Terminators, Judgement Day notably forgoes the horror angle of its predecessor, instead providing a more action-oriented story (with a much bigger budget) that would set a precedent for later films in the franchise.

The war with the machines caused by the nuclear apocalypse of Judgment Day ends with humanity as the victors, but before the humans can destroy SkyNet, it sends an advanced Terminator — a nigh-invulnerable shapeshifting T-1000 model — back in time as a last-ditch attempt to change the past so the machines will win the war, this time by killing John Connor himself before he grows into the human resistance leader. In response, John Connor sends back a T-800 Terminator that's been reprogrammed to protect his past self.

Both Terminators arrive in 1995, when ten-year-old John lives with foster parents and Sarah has been committed to a mental hospital after trying to blow up a computer factory. The T-1000 catches up with John at the same time as the T-800, the latter of which saves John and protects him at any cost. The T-800 later tells John that the T-1000 will kill anyone it chooses to replicate; when John figures out the T-1000 will attempt to replicate his mother and use the disguise as a trap, he forces the T-800 to rescue Sarah. The Connors and the T-800 escape the asylum after an encounter with the T-1000, an act which ultimately pushes the trio into a new course of action: change the fate of the world by averting Judgment Day. To do so, they must stop Skynet from becoming a reality — and keep the T-1000 off their trail long enough to do it.

The film was initially followed by Terminator 3: Rise of the Machines. The franchise since has held onto the first film and this film as absolute canon, each new work (T3, Terminator Salvation, Terminator: The Sarah Connor Chronicles, Terminator Genisys) doing an Un-Reboot relative to each other. Due to James Cameron's involvement, the official timeline sequel is now Terminator: Dark Fate.

Actor Gen Gibbel was too hesitant to really hit Linda Hamilton in a scene where he beats her character to the floor, which resulted in her bruising her knees due to having to do multiple takes of the fall. In director Jim Cameron's commentary, he laughs over how Hamilton paid Gibbels back.

Actor Gen Gibbel was too hesitant to really hit Linda Hamilton in a scene where he beats her character to the floor, which resulted in her bruising her knees due to having to do multiple takes of the fall. In director Jim Cameron's commentary, he laughs over how Hamilton paid Gibbels back.