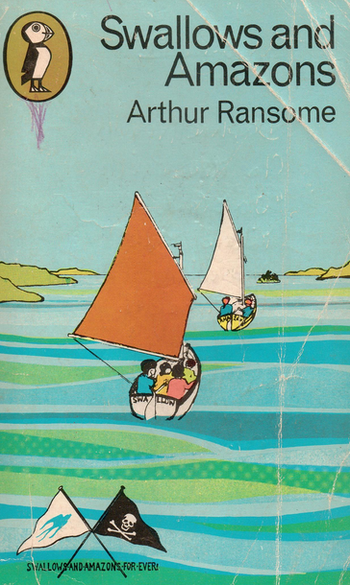 BETTER DROWNED THAN DUFFERS IF NOT DUFFERS WONT DROWN
—the telegram from the Walker children's father that starts the series
Advertisement:

Swallows and Amazons is a classic series of children's books by Arthur Ransome, about two—and then later three—families of children (the Walkers or "Swallows", the Blacketts or "Amazons", and eventually the Callums or "Ds") who vacation in the Lake District of England. Most of the books center on the camping and sailing expeditions of the children near a particular fictional lake in the area.

It's notable for featuring a relatively low level of peril, and for the rich fantasy life of its protagonists, who have a great deal of fun exploring the region around the lake as though it were uncharted territory.