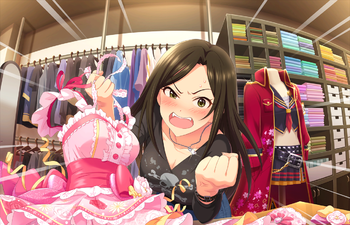 "Didn't I tell you not to make the costume too embarrassing!?"
"Who are you? AH! Why is my hair like this? Why am I wearing pink slippers? I HATE PINK! Hello? Are you even listening to me? Whoever you are? I am freaking out!"
— Heather, Just Beyond, Leave Them Kids Alone
Advertisement:

The lines between Tomboy and Girly Girl can be very blurred at times. Sometimes the tough, spirited Lad-ette (who usually Hates Wearing Dresses) has to don girly clothing or participate in traditionally feminine activities like needlework - for whatever reason.

Maybe she's trying to infiltrate the popular crowd. Maybe it's by accident. Maybe she did it on a dare. Maybe she has overbearing parents who Wanted a Gender-Conforming Child. Maybe she has to meet high-ranked people and needs to polish her manners for a while. For whatever reason, we end up with a tough, masculine girl forced into some feminine activity, and that can provide for some very funny moments.

At the end of the episode, or scene, or comic, that it happens in, she casts off the clothes, tired of the charade, and reverts to her original personality. This is supposed to come with a feminist message of how women shouldn't have to be confined to typical roles, but if done poorly, it tends to come up as demonizing and demeaning feminine women instead.

Different from She Cleans Up Nicely, which involves the Tomboy willing to look more feminine for special occasions. In that trope and other ones like it (Girliness Upgrade or Femininity Failure for example), she is sincerely attempting to become more feminine. In this trope, it's basically foisted on her, for better or for worse. Compare Dragged into Drag, for when male characters are unwillingly forced into feminine clothing. Contrast Tomboy with a Girly Streak, whose "girly streak" maybe being comfortable with dresses. The opposite is Tomboy Angst, an insecure tomboy who secretly wants to be feminine like the other girls.

The normally goth Sam reluctantly dolls herself up in pink to get an amnesiac Danny's attention. It works.

The normally goth Sam reluctantly dolls herself up in pink to get an amnesiac Danny's attention. It works.