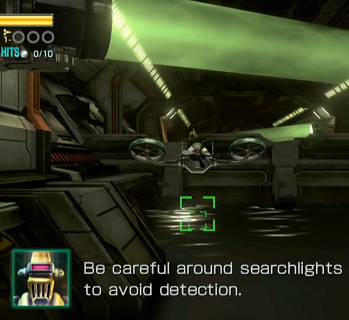 The single-mission counterpart to the Stealth-Based Game, where the player must sneak through an area infested with enemies. Getting detected may result in automatic failure and/or death or just mean being besieged by lots of guards. Being thrown in an easily escapable jail cell is also common. Frequently means dealing with guards that have no sense of peripheral vision (or hearing), so the player only has to avoid direct line of sight with them to slip past.

Sometimes the player will have to avoid searchlights that sweep about in a specific pattern. This is actually convenient for players since a visible stream of light is easier to detect and get around than a normally invisible line of sight from a Patrolling Mook. The guards may also be equipped with flashlights that give off a similar effect.

These missions are frequently hated by most players, as many, many, many versions are shoddily implimented, historically; particularly when even the slightest failure leads to instant Game Over.

May be combined with a Sniping Mission. Otherwise often occurs after the player has been stripped of their weapons. If there are alternatives to complete the mission and stealth is only an option, it's Optional Stealth. May sometimes end loudly.

A type of Unexpected Gameplay Change. The exact opposite is Action-Based Mission. See also Stalking Mission, which also involves stealth but for different reasons, Stealth Escort Mission, where someone must be protected without knowing they're protected (or even that they're in any danger), and Assassination Sidequest, a type of sidequest that requires you to kill a specific target stealthily.

See Don't Wake the Sleeper for a non-game version of this trope.

During the testing of the invisibility-granting Lamination Suit, Mario has to avoid being caught by Folded Goombas in his path.

During the testing of the invisibility-granting Lamination Suit, Mario has to avoid being caught by Folded Goombas in his path.