Video Game / Song of the Deep 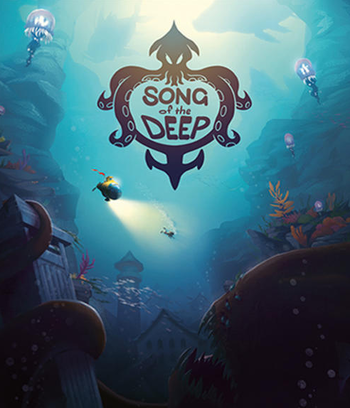 Song of the Deep is an underwater Metroidvania-style adventure game, created by Insomniac Games and released on July 12th, 2016 for PlayStation 4, PC and XBox One.
Advertisement:

It stars Merryn, a young girl who lives with her widowed father in a small shack overlooking the sea. Every day, her father goes out fishing while she takes care of things at home and waits for him to return in the evenings. After he does not return, she has a nightmare of his boat being pulled under the water, so she builds a makeshift submarine and dives into the sea to locate him before it's too late. It also features a tie-in novel that tells the same story in a different manner but also elaborates on plot points left unclear in the game.

See The Aquatic Adventure of the Last Human for another aquatic Metroidvania that was released earlier the same year.