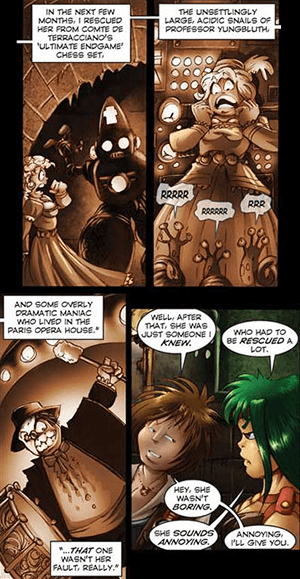 Also, she wants to kill his girlfriend.
"You have a knack for getting in trouble."
— Spider-Man (to Mary Jane), Spider-Man
Advertisement:

The Damsel in Distress is an age-old classic plot device, which places a character in danger to add tension to the story. Sometimes one character (usually a Love Interest or a relative of another character) seems to have no discernible purpose besides serving as the Designated Victim. If the character is popular with the audience, this can be effective. Other times, well... let's just say that the audience starts wishing that the Big Damn Heroes would get stuck in traffic, just so they won't have to put up with her anymore.

The Damsel Scrappy is a combination of the Damsel in Distress (or in some cases, the Distressed Dude) with The Scrappy. The result is a character than the fans dislike because she's perceived to be The Load or even The Millstone of the group, not pulling her weight compared to the importance the story gives her as a plot device. It's especially irritiating if the character is said to be a competent and valuable member of the team. Most of the time, this character's plight is due entirely to her own stupidity. She doesn't just pick up the Distress Ball, she runs it into her own endzone and gets tackled for a safety. And she keeps on doing it, again and again and again. This may be due to being The Ditz, or a severe case of crippling Genre Blindness.

Even if she's just unlucky, she may be disliked for other reasons. Perhaps the audience finds her too bland, or too bitchy. Perhaps her presence seems shoehorned into the main plot (perhaps to attract a Periphery Demographic or for blatant Fanservice), and the audience feels she steals time from the story they're actually interested in. This is especially true when her subplot has nothing to do with the main plot at all. Or else she seems like useless dead weight whose only purpose is to pad the plot by getting in trouble. And worst of all, the fans may just dislike her for getting in the way of their Fan-Preferred Couple, and actually use this trope as an excuse to hate her without being called out for it.

Faux Action Girl is frequently what you get when you mix this with an Action Girl. Chickification is what happens if an actual Action Girl gets retooled or derailed into this. Child characters can fall prey to this just as easily, especially the Tagalong Kid or a hero's Oblivious Younger Sibling. Large risk of being Trapped by Mountain Lions.

See also Too Dumb to Live. Compare The Scrappy and The Load. Compare Defiant Captive and Damsel out of Distress. See also Reckless Sidekick, Sympathetic Sue. Deliberately Distressed Damsel can justify or subvert this trope.