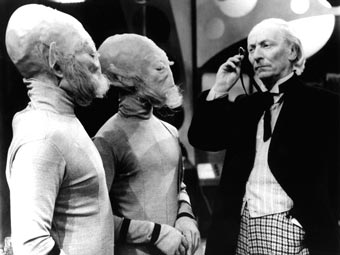 The First Doctor, seen establishing a trend that crops back up later down the road: The Brainy Specs.note Yes, yes, it's actually a monocle, but... the Brainy Monocle doesn't have as quite a good a ring to it as "Specs" does.
It all started out as a mild curiosity in the junkyard and now it's turned out to be quite a great spirit of adventure.
— The Doctor
Advertisement:

The one where the Doctor defeats some aliens by shouting.

Time for another space adventure as the TARDIS gang appear on an Earth spaceship orbiting the planet Sense-Sphere in the 28th century. The crew of the spaceship all appear to be in comas, which it turns out have been induced telepathically by the planet's denizens, the Sensorites. The Sensorites then steal the TARDIS's lock mechanism, trapping the travellers on the space ship in orbit around the planet.

It turns out that the Sensorites are more scared of the humans than the humans are of them, because they're a very sensitive telepathic race. Luckily, Susan reveals that she's exceptionally gifted at telepathy, and she makes peace with them. The Doctor, Susan and Ian decide to visit the planet and try diplomacy, while Barbara stays behind on the spaceship.

It transpires that a fatal disease is spreading like wildfire among the Sensorites, and immediately, Ian comes down with it as well. The Doctor realises that the planet's water supply is tainted with deadly nightshade. He investigates despite the interference of the City Administrator (and a lot of political intrigue), and eventually manages to convince the Sensorites that he's safe to trust. However, by that time, the entire Sensorite government is in uproar because of the scheming City Administrator realising that he can fool everyone simply by switching clothes. To make matters worse, the Doctor actually suggests that the City Administrator be promoted. Luckily, Barbara rejoins the plot on the planet, immediately realises what's going on and starts setting everything straight by establishing a psychic link with Susan (using Sensorite telepathy technology).

Going back into the sewers with Ian, the Doctor eventually discovers the deranged survivors of a previous Earth expedition, who have been poisoning the water supply, believing that they're at war with the Sensorites. The Apocalypse Now enactment group is swiftly arrested, the Doctor whips up a cure and all is well. The humans of the spaceship decide to head home — and when Ian comments that they at least can steer their ship, the Doctor throws a bit of a hissy fit and tells Ian that he and Barbara will be unceremoniously dropped off at the next destination for insulting his piloting skills.

Due to the similar design of the Sensorites to the Ood in the new series, in "Planet of the Ood", Sense-Sphere is shown to be in the same system as Oodsphere.