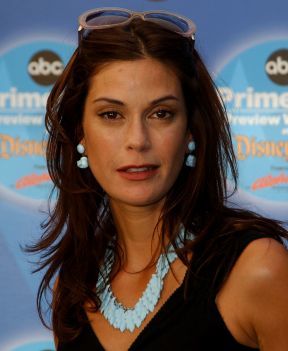 "I am blessed to be able to work at a job I love and also give back in the most vital way - to people in need."
Advertisement:

Teri Lynn Hatcher (born December 8, 1964 in Palo Alto, California) is an American actress, writer, presenter, singer, and former NFL cheerleader. She is well-known for her prolific and diverse acting career across television and film, recognized across multiple roles since 1985.

She was born in Palo Alto, California and grew up in Sunnyvale. She took ballet lessons at the San Juan School of Dance in Los Altos and attended Mango Junior High (now Sunnyvale Middle School), Fremont High School, and De Anza College in Cupertino. She studied acting at the American Conservatory Theater, and one of her early jobs was as a cheerleader with the San Francisco 49ers.

In 1985 she joined the cast of The Love Boat, followed by a recurring role as Penny Parker in MacGyver and a guest-starring role in Quantum Leap.

Her Star-Making Role was as Lois Lane in Lois & Clark, followed by her beating out Monica Bellucci for the role as Bond girl Paris Carver in Tomorrow Never Dies. The same year, FHM Magazine voted her the world's sexiest woman.

Since then, she has enjoyed a busy career across film and television, including one of the lead roles on Desperate Housewives, earning her a pile of awards as well.