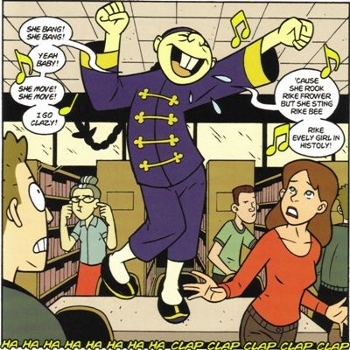 Chin-Kee: making fun of Asian guys in whole new ways.
"We are the men of amusing races,
Fated to be eternal jokes.
Dialect men with amusing faces,
Never are we like other folks."
— "Ol' Man Author," song parody by Oscar Hammerstein II
Advertisement:

An awful relic from less enlightened times, or a sign that the attitudes from those times have not gone away completely. Comic relief characters in the Sidekick Creature Nuisance or The Scrappy mold whose strangeness in appearance and behavior is put down to their being of a different race or ethnicity to the heroes. Often highlighted by their being extreme gonks in an otherwise normal cast.

Sometimes, ironically, they were put in precisely because the creators wanted some diversity in the cast. This is definitely one case where Monochrome Casting would have been a lot less offensive.

Many early cartoon characters fall under this trope, which usually highlights interesting arguments between meme insensitivity and deliberate racism. Animation fans usually defend characters like Bosko, who was obviously a racial caricature of a sort, but isn't treated maliciously and is always the hero.

Unfortunately, this is still prevalent today, some being Lampshaded, but some still sometimes used straight, and annoying Jive Turkey Black characters are not uncommon. Some modern usages are played for Stop Being Stereotypical or Cringe Comedy, and there have been several Magic Realism and Imaginary Friend variations recently. Modern remakes of works with one of these tend to either drop the character completely, or remove the racial caricature to make them simply a realistically depicted person of that ethnicity. To fit this trope, by definition a character must not merely be packed with derogatory stereotypes, but also be The Scrappy.

See also Uncle Tomfoolery, Sassy Black Woman, But Not Too Foreign. Contrast Mexicans Love Speedy Gonzales, where the character eventually (or even right off the bat) becomes popular with the ethnicity in question.

It's not unheard of for fantasy and science fiction works to create similar characters to represent "alien" races — especially if those "aliens" are a Fantasy Counterpart Culture or one of the Recycled IN SPACE! equivalents. These "Alien Scrappies" still fall under the blanket of the Ethnic Scrappy; they are scrappies because of their cultural posturing/attitude.