Recap / Tintin - Tintin in the Congo 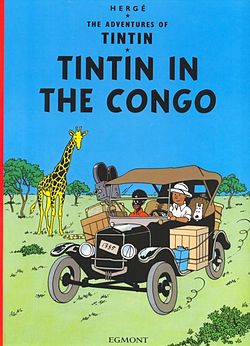 Tintin and Snowy go on a trip to the Belgian Congo to hunt lions. While there, Tintin finds himself the target of a mysterious hired killer who follows him on his travels around the country. And as for actual plot, that's pretty much it. The bulk of the story is about Tintin's Random Encounters with the African wildlife and the childishly naive natives.

Today, Tintin in the Congo is rather infamous in some countries for its racist portrayal of the Congolese natives, its pro-colonialist themes and its utter disregard for animal welfare. It is notable that Hergé himself originally had not planned the story; he had wished to send Tintin to the United States (this would eventually happen in the next story, Tintin in America), but Norbert Wallez, the chief-in-editor of Le Petit Vingtième in which Tintin was serialized, wanted to inspire support for the Belgian colonial administration and Christian mission in Congo, and so some Executive Meddling took place and Hergé was convinced to do a story about Congo instead.

Hergé would later look back at the story with embarrassment and cited it as "bourgeois" and "paternalistic". Attempts have been made to ban the book entirely at times in some countries. It currently tends to be sold with a foreword informing potential readers about the controversial content and providing historical context (at least in Anglophone countries). It was also actually reprinted by a Congolese newspaper in the Seventies.