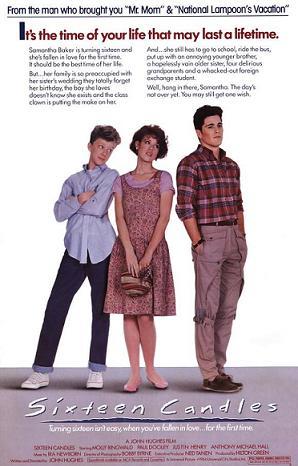 "I don't believe it: They fucking forgot my birthday."
— Samantha Baker
Advertisement:

Sixteen Candles is a 1984 film written and directed by John Hughes, the first of his six teen comedies.

Molly Ringwald stars as Samantha "Sam" Baker, a girl facing numerous emotional challenges on her sixteenth birthday. Her family, focused on the wedding of her older sister, Ginny, forgets her birthday; she's in love with senior Jake Ryan, who she thinks doesn't know she exists; and she's pursued by a geeky freshman, Ted (Anthony Michael Hall).

Not to be confused with 16 Wishes — even though that movie does, indeed, have sixteen candles.