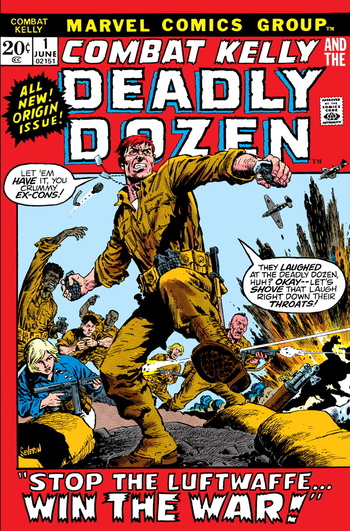 Combat Kelly and his Deadly Dozen (simply titled Combat Kelly for its copyright, indicia and digital reprints) is a 1972 comic book series from Marvel Comics. The series was created by writer Gary Friedrich and artist Dick Ayers, and was a Spin-Off of the successful WWII title Sgt. Fury and his Howling Commandos. The premiere issue continued a story that began in Sgt. Fury #98 (May 1972), and occasional crossovers continued between these two series. The series lasted for nine issues.

The series featured Corporal Michael 'Combat' Kelly as the leader of a team of convicted criminals who serve in the army during the Second World War to pay for their crimes. The series featured a racially diverse cast much like Sgt. Fury and his Howling Commandos (including Jay Little Bear, who’d previously been a team member in one of Marvel’s other World War II comics, Capt. Savage and his Leatherneck Raiders), but unlike the characters in the previous series, the so-called Deadly Dozen was much more morally loose, as the series features them sometimes committing war crimes, such as shooting unarmed non-combatants. It more closely reflected the antiwar sentiment of the early 1970s than Marvel's traditional war books.

Combat Kelly and his Deadly Tropes: