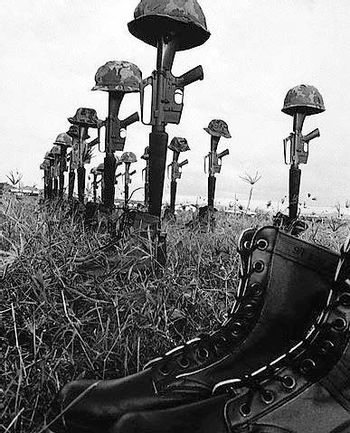 "Behold! These lifeless keys used to be full of power, united with the hearts of their masters. On this barren soil, Keyblades of light and darkness were locked in combat... as a great Keyblade war raged!"
— Master Xehanort, Kingdom Hearts: Birth by Sleep
Advertisement:

A character falls in battle, and is buried by his comrades (or his enemies, if they consider him worthy). But for whatever reason, the grave isn't marked with a traditional tombstone, but rather with the slain character's weapon. Maybe circumstances didn't allow a regular marker, maybe it's just traditional (for the slain or the ones burying him), or maybe someone thought it would just be a poignant gesture.

Can be done with any type of weapon, although something with a blade will obviously be easier to stick into the ground. A sword, on top of being the standard heroic weapon, has the bonus of looking like a cross when planted this way. Regardless, this is almost always done in a way that the weapon is oriented vertically, rather than just laying on top of the grave.

Frequently combined with Headgear Headstone, with the warrior's helmet (or other headgear) being placed atop the weapon.

This has been done sometimes in Real Life, with the most iconic modern example being a rifle with the boots placed near it and the helmet on top, but usually only as a temporary measure to serve as a grave marker for soldiers that were killed in the field and had to be buried close to the front lines; permanent headstones were brought in later, or the bodies moved, so the weapons wouldn't be wasted. Fictional characters often seem less concerned about losing weapons to permanent graves, for one reason or another.

Weapon Tombstones are often removed by the fallen's descendants or successors for actual use at a later date, especially if they're Ancestral Weapons or are otherwise unique.

An entire graveyard of these is often a Field of Blades. See also Sword Plant. Not to be confused with a tombstone used AS a weapon, or the pump-action shotgun from the earlier Saints Row games.