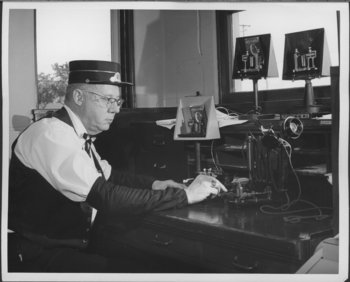 The telegraph operator in The Western, generally wears a white shirt, suspenders and a green eyeshade. The telegraph office is in the railroad station; while owned by two separate companies, they have a symbiotic relationship (in Real Life, the telegraph lines and railroad ran side-by-side between towns all over the country). May or may not employ one or more young boys to deliver incoming messages to in-town businesses and homes—if not, everyone else in town has to go to the office to pick up incoming telegrams. Since messages can arrive at any time, the Western Union man himself is seldom seen outside the office. Unlike his Pony Express predecessor, tends to be a Meek Townsman. Sometimes gets to Take a Level in Badass if the train station gets robbed.

The Western Union corporation provided most of the telegraph service in the United States from the 1850s to 2006. The long period of obsolescence—again, WU discontinued telegram service in 2006, a scant two years before the iPhone was launched—masks just how bleeding-edge the technology was when introduced. It was a major development for human communication, the first time ever information could travel faster than it could be physically carried on a written note (beyond the radius practical for line-of-sight means like semaphore or smoke signals). The Western Union Man is the forerunner of all geekdom.