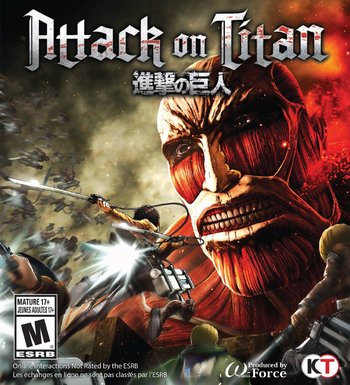 Attack on Titan (known as AOT: Wings of Freedom in Europe) is a 2016 video game based on the popular franchise of the same name. It covers the first season of the anime (or up to chapter 33 of the manga), as well as some elements from the then-upcoming Season 2. The game was released February 18, 2016 in Japan for PS4, PS3, and PS Vita, with an English localization following on August 26 and 30 of the same year for Europe and North America, respectively; the Western release added Xbox One and PC ports.

Attack on Titan 2 contains examples of: