Video Game / Attack of the Mutant 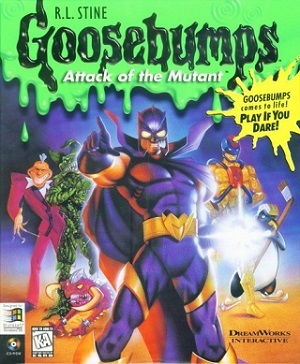 Attack of the Mutant is a 1997 PC game based on the Goosebumps novel and television episode of the same name. However, the game has more characters and an extended as well as different plot.

You play as an unnamed and genderless Silent Protagonist who gets off the bus at a stop they didn't want to. Turns out this stop is the headquarters of the infamous supervillain, the Masked Mutant, who can transform into anything and anyone. The protagonist teams up with the League of Good Guys, a team of superheroes, to stop the Mutant's plot to take over the world. However, along the way, you'll have to deal with quite a few insane supervillains...and then there's the Mutant himself...

Like Escape from Horrorland before it, the game actually has quite a few scares and surprises (at least for children) and two different endings. Despite this, it also has some Lighter and Softer moments; making for a bit of Mood Whiplash. Also notable for being one of the first video games to use cel-shaded animation. Also, Adam West plays the Galloping Gazelle, leader of the League of Good Guys.