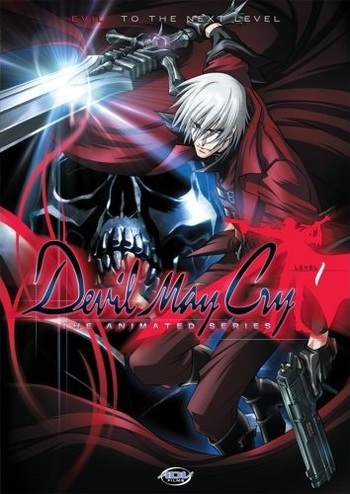 Keep Rockin', Baby!
Devil May Cry: The Animated Series is the anime of the Devil May Cry video game series created and owned by Capcom, and animated by Madhouse. It is a story that ran for twelve episodes and takes place between DMC1 and DMC2.
Advertisement:

The series follows half-demon Dante as he runs his supernatural Detective Agency, Devil May Cry, as a justification for carrying out his war against the Demon World. In addition to Trish and Lady, characters from the video game that the series is based upon, two new characters make an appearance. These are Morrison and Patty Lowell; Dante's informant and temporary ward, respectively.

The Devil May Cry animated series follows the tradition of the original animated series of Hellsing in that it chronicles primarily self-contained adventures before bringing them to a linked final conclusion at the end of the season. The animated series favors animation, music, and other elements of style over detailed plots or characterization.

There are also two Drama CD volumes released on 2007 and 2008, which are voiced by the Japanese cast and narrate stories occurring during the same time as the anime.

The US release was originally handled by ADV Films in 2007, but the license was transferred over to Funimation in 2008 in light of ADV's financial troubles. In July 2015, the English dub started airing on U.S. cable network Chiller TV, a horror themed sister channel to Syfy, as part of their late night Anime Wednesdays block, along with other horror themed anime previously licensed and dubbed by Funimation.