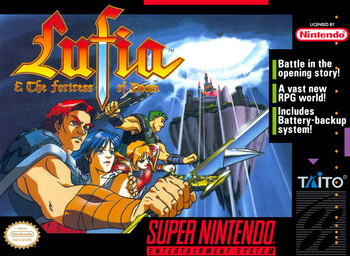 100 years ago a band of heroes set off to the evil Sinistrals, a group of four gods who planned to rule over the world from the floating Island of Doom. With the power of the Dual Blade in hand Maxim and his three companions Selan, Guy, and Artea were able to defeat the Sinistrals. Their victory came at the cost of Maxim and Selan's lives, but victory it was. The world is at peace once more, but one man stands on the lookout for the Sinistrals who vowed that they would one day return. Though everyone else was convinced it would never happen the Sinistrals did in fact return and our young hero sets off with a mysterious girl named Lufia on a quest to once more seal away the gods.

This is Lufia & The Fortress of Doom or Estpolis Denki (Biography of Estpolis) for the SNES. Published by Taito before it closed its doors in America and developed by Neverland, Lufia is a rather simple turn-based JRPG. The first in the Lufia series, it would introduce the series setting, the Sinistrals, and the Dual Blade. Gameplay-wise, it was your typical JRPG. You had a party of four characters with preset roles. Some such as Lufia could use magic while others bashed baddies on the head with large and deadly weapons like swords and axes.