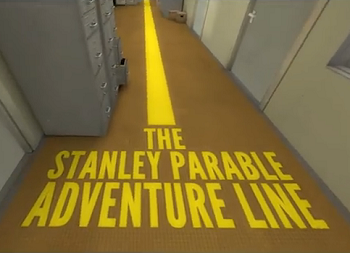 For all your plot railroading needs!
Advertisement:

A particular video game plot consisting of the protagonists following a path laid out for them (although this isn't exclusive to linear games) with seemingly no real thought as to where they might end up. They face countless diversions and dangers, yet, somehow, they always end up at the place they were supposed to reach (and are Just in Time in a lot of cases too). It's clear that you have no other reason for doing things besides the fact that the designer decided that you should.

Sometimes, the game acts like the protagonist knew exactly what they were doing all along, despite the player having no real idea where things were heading. Is most commonly found in Platform Games.

Generally due to Gameplay and Story Segregation. See also But Thou Must! and Solve the Soup Cans. Not to be confused with No Sidepaths, No Exploration, No Freedom, which refers specifically to the level layouts themselves, unlike this which applies more to how the plot handles the characters progression and can apply to almost any sort of level layout. Indeed, the 'main questline' in most Wide-Open Sandbox games tends to function like this with much of the openness coming from the vast variety of Side Quests and other diversions that the player can indulge in if they don't care about finishing the game.

Excuse Plot can be a justified or variation of this trope.

Many (perhaps even the vast majority) of games before the 32-bit era fall under this trope, as the Story-to-Gameplay Ratio was very low then, and, as a result, you just made your way through various stages until, seemingly coincidentally, you ended up at the Big Bad.

See also Railroading, for when the Game Master of a Tabletop Game tries to do this to his players.