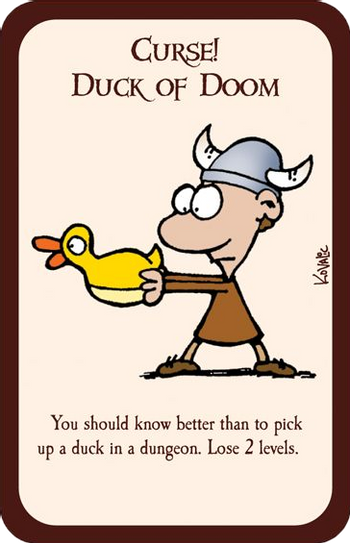 There's something primal about saying "Doom". The deeper, the more echoey, the more stretched-out, the better. "Of Doom" can be added to any noun you wish to turn it into something terrifying; if you want to add some Gaelic whimsy or simulate an accent, "o'Doom" can be used instead.

People also often forget that "doom" (related to "deem," i.e., "judge" or "estimate") comes from the idea in Old English and Norse mythology of an ultimate destiny, which need not necessarily be a bad one — you could re-translate the phrase "He met his doom" as "He met his fate". File that one away, fact fans! Another possible re-translation would be "He met his (ultimate) judgment", as the Modern English word "doom" is derived from the Old English word "dōm" (pronounced like "dome"), meaning "judgment" or "law". Hence that wonderful word "doomsday," meaning "day of judgment." Feeling comforted yet?

If you want Nightmare Retardant, then bear in mind that it is derived from the Proto-Indo-European word *dhoh1mos, meaning "thing that is put", and "doom" is the exact same word as the Ancient Greek "θωμός"* (pronounced "thaaww-MAWCE" with a puff of air accompanying the T) meaning "heap".

This trope is parodied so easily and so often it has become an Undead Horse Trope. Doom can also be considered an Inherently Funny Word, and as such has a tendency to appear most often in Laughably Evil characters.

Tropers are especially susceptible to this.

Trope names that have themselves met their doom: