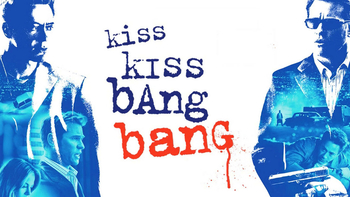 A title that just consists of saying the same word twice.

It's one way to title your story. It could sometimes be laziness, or perhaps two words together in a single title makes it sound more mysterious. It could also mean there are two of that specific word in the story, which could be plot-significant. It may also bring a well-known phrase to mind (eg. "Win-win" or "Liar, liar, pants on fire"). In more fantastic works, it could also have some spell-like connotations (eg. "Double double, toil and trouble", "Mirror, mirror, on the wall").

Note that this trope allows for more than one repetition, e.g. "Triple, Triple, Triple" titles. Titles with multiple repeated words, like Kiss Kiss Bang Bang, also count. However, every word must be repeated, so Doki Doki Panic doesn't count.

Compare Repetitive Name. Also, these kinds of titles are Alliterative Titles by default. Has nothing to do with getting double-digit stats in multiple stat categories in a basketball game.