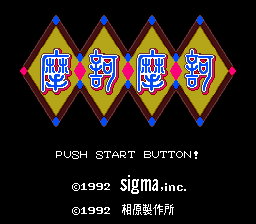 Maka Maka is an obscure (at least in America) RPG for the Super Famicom made by Office Koukan and published by Sigma Enterprises in 1992. It takes place on an Earth where Ultraman-style aliens, giant cannibalistic alien princesses, and evil, faceless ant-men are completely normal, and the main character is the reincarnated form of an alien prince who defeated an evil demon king millennia ago. Now, completely resurrected and full of power again, said demon king wants revenge, organizing the Maka Maka Society to conquer Earth. It's a standard JRPG full of quirky Japanese humor that makes you wonder if the designers were on anything.

Office Koukan took so much time working on the game that it only got up to prototype phase by the time the release date was beginning to draw near. Sigma, having no choice but to cancel the game if they didn't release it, did the only thing they could possibly do to avoid losing money: They copied, shipped, and sold the prototype of the game in bulk. With the game in such a terrible, glitchy state, it quickly became a part of many Japanese gamers' Bottom 100 games, and Sigma went out of business.

Not to be confused with a Yuri manga of the same name.