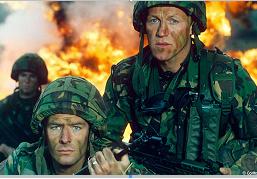 Robson and Jerome, not singing

Soldier Soldier is a British television drama series. it was titled after an old traditional song of the same name - Soldier, soldier will you marry me, with your musket, fife and drum? This was used as its theme music.

Broadcast on the ITV network, it ran for a total of seven series and 82 episodes from 1991 to 1997. It featured the daily lives of a group of soldiers in 'B' Company, 1st Battalion The King's Fusiliers, a fictional British Army infantry regiment loosely based on the Royal Regiment of Fusiliers. Set in the immediate aftermath of the Cold War, it is a dramatisation of British army life in the early to mid-1990s, when the British Army was undergoing significant change. This is perhaps best demonstrated during the third series, around 1994, when a significant number of real regiments were forced into amalgamations with each other due to downsizing of the army. the show reflected this when the King's Fusiliers were forced to amalgamate with the Cumbrian Regiment, another fictional regiment, becoming the King's Own Fusiliers. At the time Soldier Soldier was broadcast, the fatality rate was low with most casualties due to training accidents and suicides. The military as a whole was assigned to performing more peacekeeping missions than actually doing any fighting. As a consequence, the show served well to portray the army, despite the domestic problems that could occur, in a fairly good light.

Tropes paraded for inspection in this show include - wait for it, you horrible idle little trope! - these.