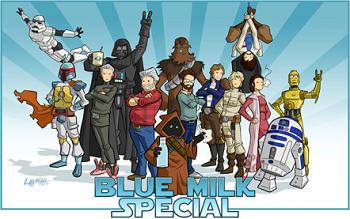 Blue Milk Special is a webcomic parody of the original Star Wars trilogy (with select parts of the Expanded Universe thrown in as well).

Generally, most of the tropes appearing in the original trilogy movies appear in the strips. Important pieces of dialog also appear.

You can read the latest page here.

The webcomic is also available on German,

They also are doing a Spin-Off of BMS called The Darklighter Chronicles exclusively for their Patreon subscribers.