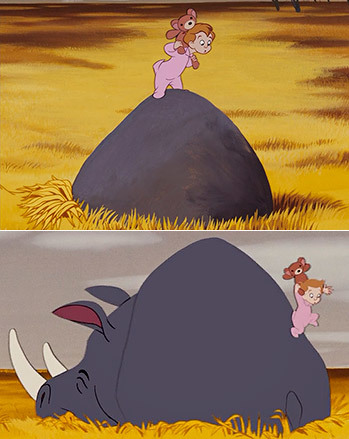 Characters traveling in an unfamiliar area choose to stop at a landmark. They discover that it's not terrain, it's something, and much bigger than that something has any right to be. The specific something can vary considerably, but it's typically either a living entity, its remains, or something created by living entities, such as a building, a vehicle or the like. Often accompanied by a Reveal Shot.

Common Subtropes of this trope include characters finding out that the giant crater is actually a giant footprint, that an asteroid, moon, planet or other astronomical body is a gigantic spaceship or station, that the asteroid cave you're hiding in is a giant space slug, or that a mountain, hill, or island is a sleeping giant/troll/turtle/earth elemental. Sometimes, the elephant is the room, metaphorically, and entire world you're on is a giant turtle. Or maybe it's still just the kind of place you thought it was, but alive.

For ships/stations that may literally be confused with moons (or planets), see Planet Spaceship. See also Big Dumb Object and Dyson Sphere. If it's a real-world location, may overlap with Weaponized Landmark. Whatever the actual object turns out to be the discovery of it can often lead to an Oh, Crap! moment. Contrast No Mere Windmill, Genius Loci.

Warning: These are potential spoilers, so everything will be unmarked.